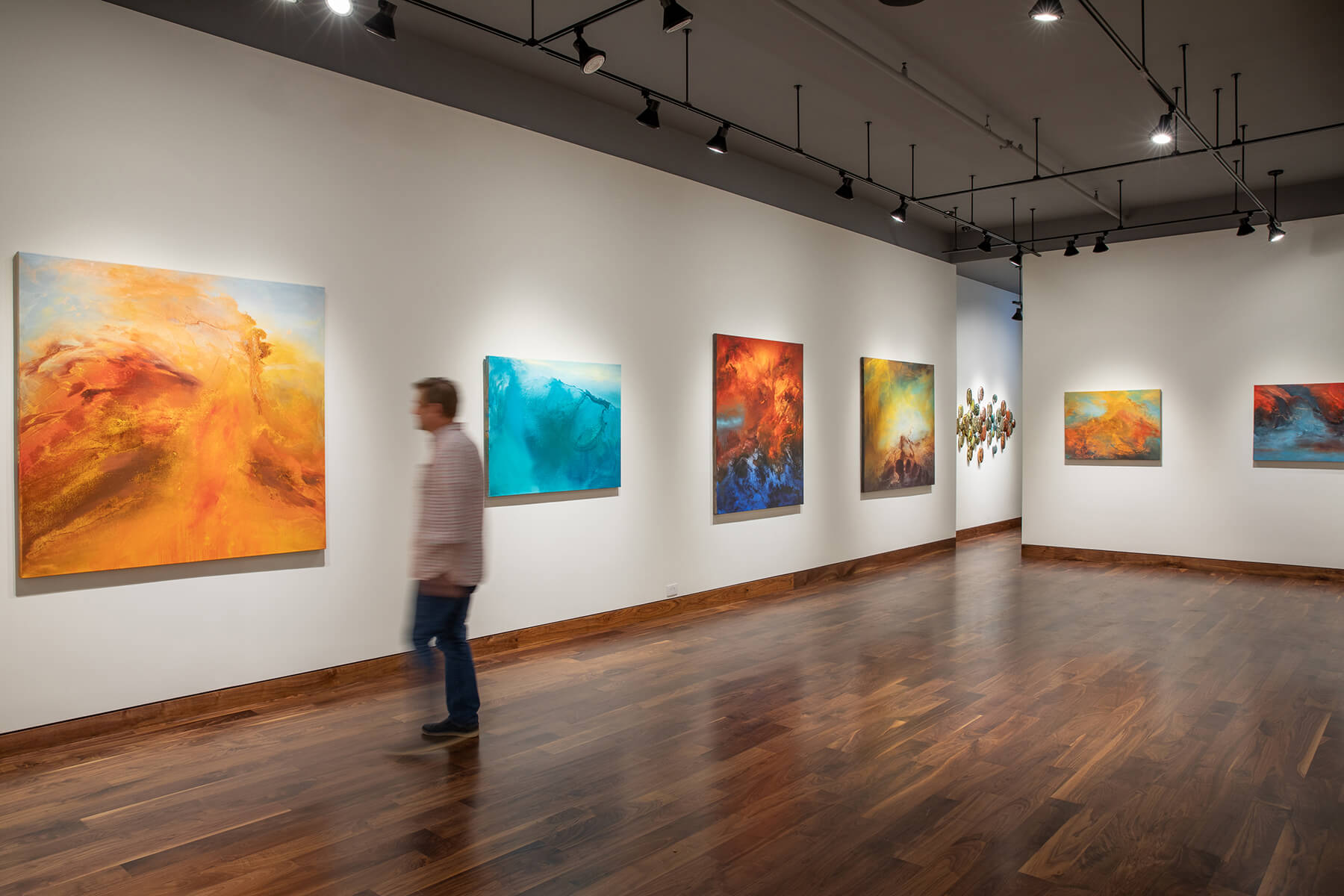 Our team has been behind the creative rehabilitation of several of Asheville’s preeminent art galleries and here we look at what it took to rehabilitate some of Asheville’s most vivid art spaces. Art gallery design is a creative process that blends art and functionality. 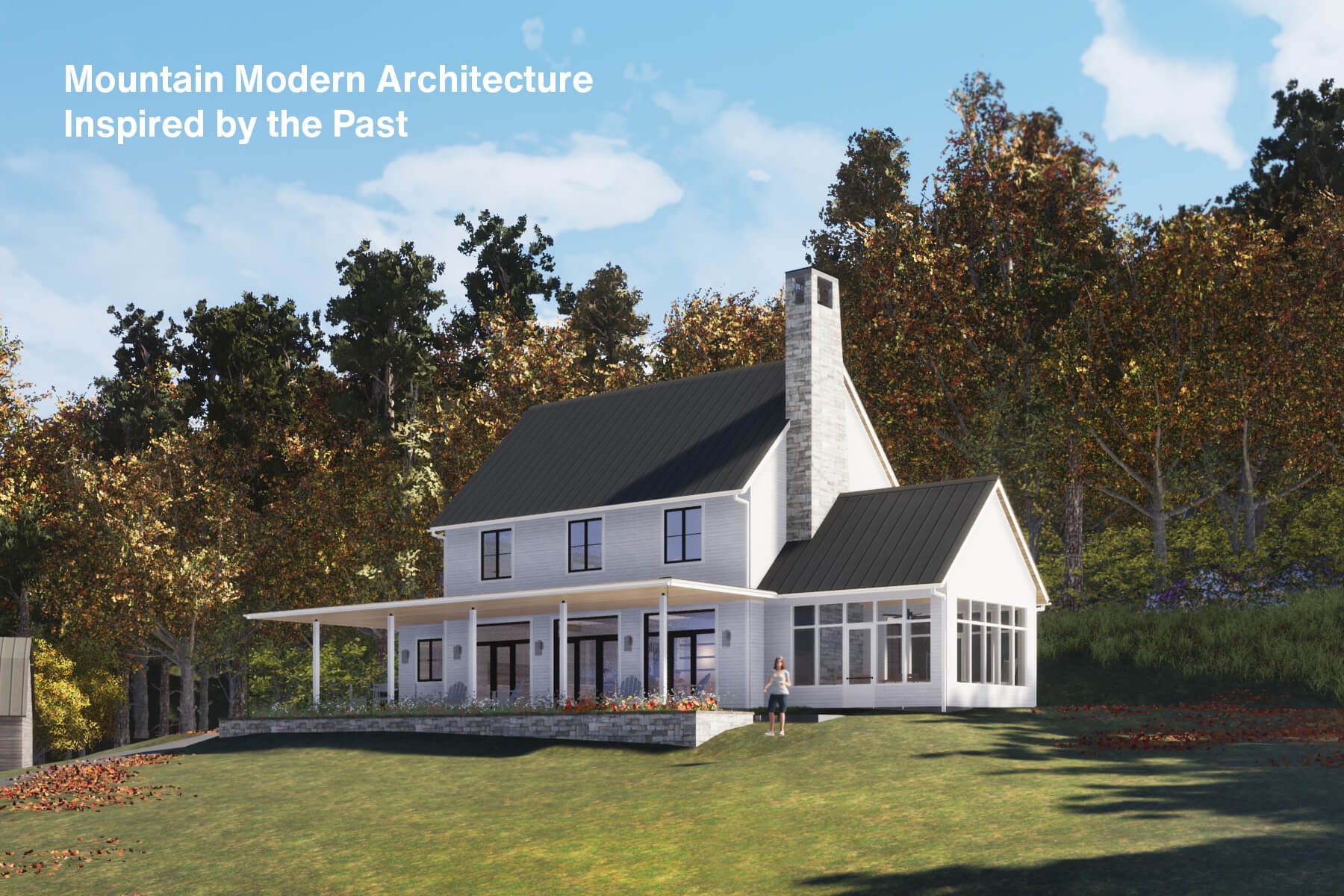 Mountain Modern Architecture Inspired by the Past

Good news comes to us this Earth Day from the NC Sustainable Energy Association (NCSEA): clean energy is working for North Carolina! According to a new RTI International report, clean energy, which includes renewable energy and energy efficiency, is a good investment for the state of North Carolina since $1.64 in revenues were returned to state and local governments for every $1 of state incentive claimed. The latest report shows that between 2007 and 2015, $12 billion were generated from $6.3 billion in clean energy investments, and these investments were nearly 20 times larger than the state incentives for them. Rural communities 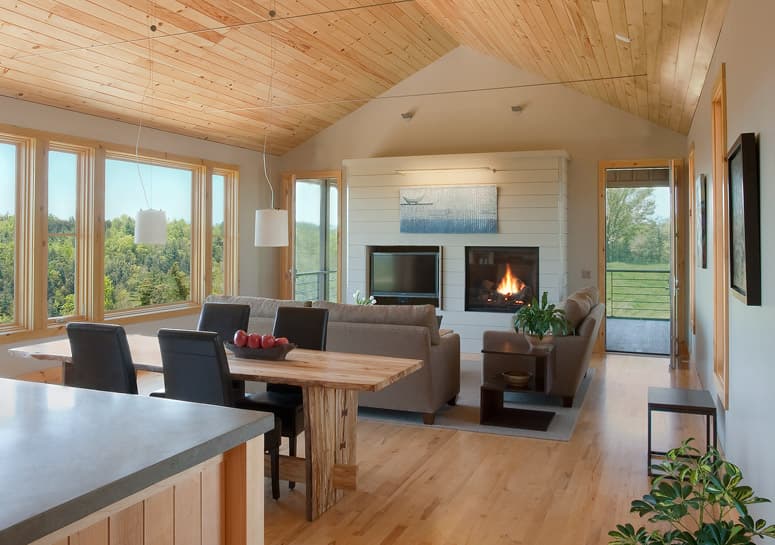 Creating balance between a fireplace and television

A challenge that often occurs while designing a house is how to balance both a television and fireplace in the same space. Televisions can be an eye sore when it comes to design, and having both can create competing focus in a room. A multi-functional gathering space that fosters both entertaining and relaxation, with or without the TV or fireplace on, is important to many homeowners, so finding a harmonious arrangement requires thoughtful design. Above: Town Mountain Residence Sometimes the easiest solution is to place a television above the fireplace. The concern with this placement is that the television becomes the focus 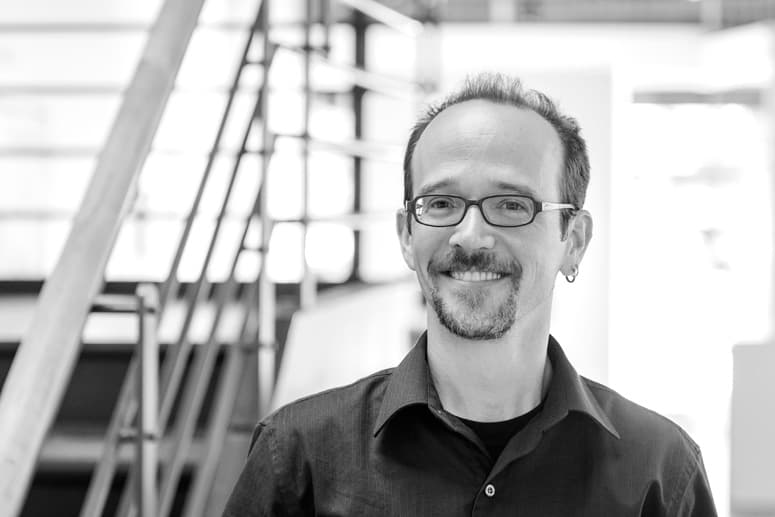 In this week’s edition of the Mountain Xpress, Samsel Architect’s Duncan McPherson was interviewed for a feature on the thriving green building movement in North Carolina. North Carolina is a leader in renewable energy, thanks in part to the Renewable Energy and Energy Efficiency Portfolio Standard that was passed in 2007. Even through the economic slump in 2008, green built homes were flourishing and retaining value. Now, as the housing market has recovered, green building has exploded. The Western North Carolina Green Building Council, which was established in 2001, has just celebrated the 1,000th green built certified home and the 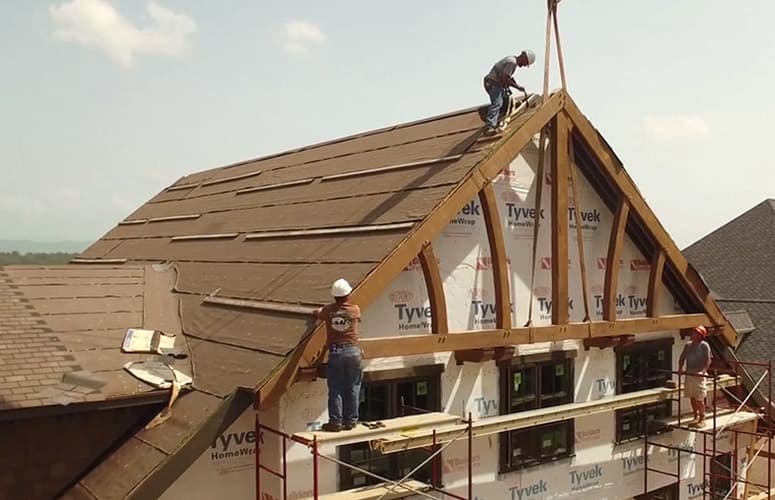 Large gable trusses are a prominent design feature of our Jonesborough, Tennessee residence. Made from white oak timbers, these dramatic trusses adorn both the front and back facades of the home. Handmade and installed by Carolina Timberworks, each truss weighs in at 2,400 pounds and required a crane to lift into place. On installation day, Carolina Timberworks filmed video of the process, which can be seen in the video below. Timbers will be installed at the front and rear porches to reinforce the design element across the entire house facade. Timbers will also be prominently featured in the home's interior, 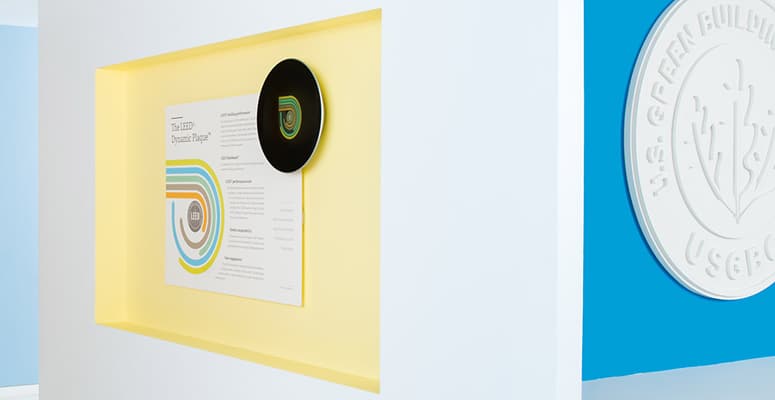 LEED, the green building rating system, has existed for fifteen years, but growth of this program has been waning in recent years. In order to combat this, The US Green Building Council (USGBC) has introduced the LEED Dynamic Plaque. The purpose of the new dynamic plaque is to, not only generate interest in LEED certification, but also to make it easier for already certified buildings to maintain their status. This plaque is a dynamic marker that monitors the green performance of certified projects. The built in scoring platform makes it easier for annual recertification. The plaque displays the LEED Performance Score 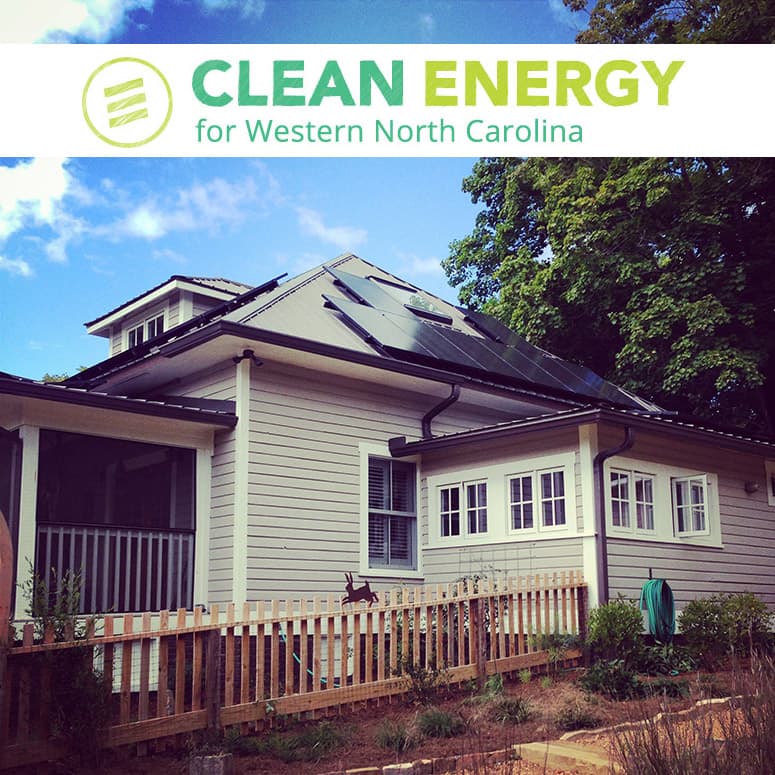 Do you spend a lot on your energy bill every month? Have you ever considered offsetting your bill with solar power or energy efficiency? A new local program, Clean Energy for WNC (CE4WNC), makes it cheaper and easier than ever before for individuals in Asheville and Western NC to adopt solar power and energy efficiency in their home or business. CE4WNC used a group-purchasing model to negotiate a deep price discount on solar technologies and has organized energy audits for participants who enroll before October 1, 2015. The contractors providing these services were selected through a competitive bidding process of nearly 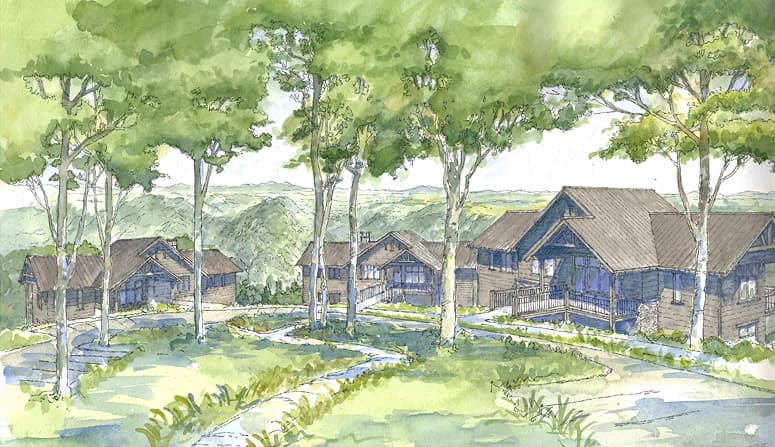 Pinnacle Cottages at Virginia Resort due to open soon

Perched above the Dan River Gorge near the Blue Ridge Parkway in Virginia, Samsel Architects’ project for Primland Resort is nearing completion. We designed four new structures for Primland, aptly named the Pinnacle Cottages in reference to the nearby Pinnacles of Dan. All four structures house four guest suites that each offer spectacular views of the Gorge and the Pinnacles below. Eight of the sixteen suites contain living areas with fireplaces and kitchenettes, and a large covered porch in addition to a private bedroom and bathroom. The remaining eight smaller suites are configured as conventional hotel suites, with a private bedroom, 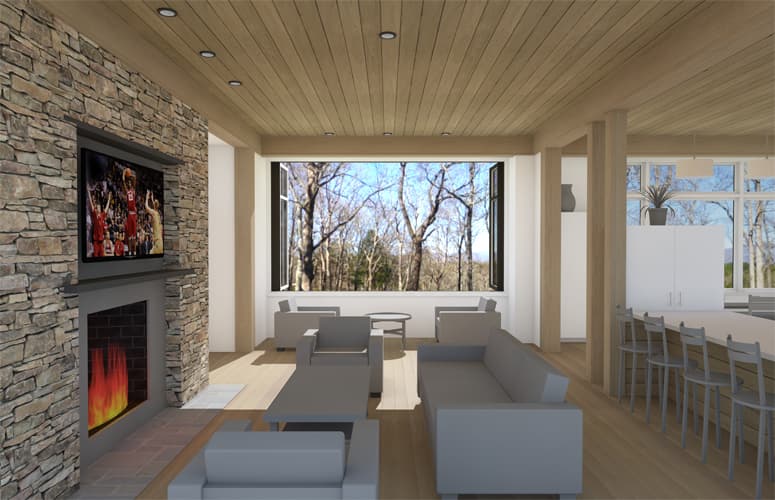 Plans for a new mountain modern farmhouse in Polk County are taking shape and our focus has now shifted to refining the interior palette. The design concept for this house is to create a simple, warm and bright atmosphere through the use of colors and materials. On the main level, there are four central living spaces that are all open to each other, so we developed a neutral palette of stone, natural wood and single-toned painted surfaces. This approach unifies the spaces and visually calms the rooms, which otherwise could feel busy and distracting. Choosing the right palette for a project

Aerial view of our Spruce Ridge Cabin that shows t

The Spruce Ridge Cabin is located in a dense fores

Excited to share a couple renderings of a project

Over the past eight days we have highlighted our 3